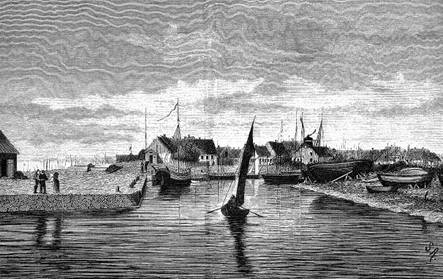 Already 2000 years BC people sought up the River Råå, whose opening is the harbor. Saxus Grammaticus, who lived in the 12th century, tells about the battle between the two Vikings Angantyr and Starkodder, in a place which today is a part of our village Råå. A memory from this time is the old church, which oldest part dates back to the 12th century. The church is the oldest building in Helsingborg.

This part of Sweden belonged to (was a part of) Denmark until 1658. This means we have been Danes for a longer period of time then we have been Swedes. This is probably one of the reasons to the feeling of rivalry between Swedes and Danes combined with the feeling of fellowship with the Danish people. This was not least shown during the 2nd world war during which fishermen from the village participated in transporting refugees from the occupied Denmark to Sweden.

The beach of Råå has been a good landing spot. The village has therefore been haunted by enemies numerous times over the centuries. In 1522 the Germans tried to invade the village but were forced to retreat. In 1676 the Danes invaded trying to win back what was lost in 1658. In 1709 Råå was plundered by the Danes. The story goes that the women and children, who were not able to escape, hid in the chimneys.

In 1788 the Russian fleet burned down Råå. 32 of the 41 houses were destroyed and 156 people became homeless. Boats and fishing equipment were also destroyed. 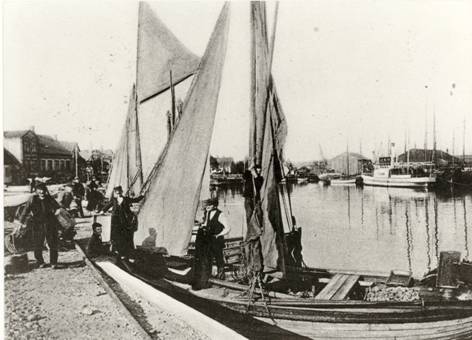 During the 19th century fishing became an important source of income. From 1885 until 1915 Råå was the largest fishing village in Sweden with 130 fishing boats. During this time the fishermen made longer and longer fishing expeditions heading north as well as south. They went as far south as the German coast and as far north as up around the island of Läsö in Kattegat. The fish were sold in different harbours along the Swedish and Danish coasts. A lot of it was sold in Copenhagen. The fish that was caught were mainly herring, cod, plaice, salmon, turbot and sole.

During a couple of decades in the middle of the 20th century it was possible to catch tuna in Öresund during the summer months. The tuna fishing was mostly for sport and leisure. Tuna was caught with gigantic rods. It was an exclusive fishing for the wealthy citizens. Sweden’s former Crown Prince was one of those who tried his luck in tuna fishing. The largest tuna ever caught in Öresund weighed 400 kg. The tuna fishing was a well needed extra income for the fishermen. They rented their fishing boats to the wealthy fishers. 1964 was the last year for fishing tuna in Öresund. Thereafter the tuna has never returned.

Today there are almost no fishermen with fishing as their livelihood, freighters with Råå as their registered harbour or shipyards left. But instead nowadays Råå has a very popular big marina with room for 1100 small yachts.

Fishing was not always a reliable source of income.

In the middle of the 19th century fishing gave a poor income and in many homes poverty struck. The income was strengthened by “lurendrejeri” (smuggling). The villagers of Råå became famous smugglers. The smuggling was, by most of the villagers, regarded as a legal income and an honourable job. Men as well as women participated. The smuggling was systemized during the 1840’s when several smuggling companies were started. Huge rowed boats (snipor) were built for 10, 12, 14 or 16 men. Mainly spirits and textiles but also tobacco and arsenic were being smuggled (arsenic was used to fight vermin). When the smuggling was at its peak 200 000 jugs of spirits were brought in yearly (1 jug =3 liters) – about 90 000 gallons. Fairly regularly there were fights between customs officers and smugglers, involving shooting. Many villagers both customs officers and smugglers were physically scarred by the battles. Towards the end of 1870’s Denmark and Sweden were united in their legal systems which made the smuggling much more difficult. In 1878 profitable fishing started around the island of Anholt in Kattegatt. At the same time a religious revival hit the fishing village of Råå. The widely spread lawlessness and boozing stopped.

Around 1880 Råå was one of the biggest sailing ship-communities in the country. At it’s peak there were 51 sailing ships, sailing worldwide, with Råå as their registered “home-harbour”. Råå was also considered to have the largest amount of sea-captains in relation to its population. In the middle of the 20th century Råå also had a few steamers and motor ships registered as belonging to Råå.

Most of the fishing boats and many of the sailing ships were built in Råå. At first the boats were built on the beach. Later a number of shipyards where built by the harbor.